Grand Palace replaced Kirin Seafood Restaurant in 2011. I had been there when they were still new but it was a really chaotic and unpleasant experience. Recently, I had the opportunity to give them a couple of tries again and I’m happy to report that the chaos is gone, the food is much better and the service is exceptional.

We visited on a Sunday night and it was a full house, much busier than Kirin used to be before they shut down this location. The food took a little over half an hour to come after we ordered but given how busy it was, it was acceptable.

They set up the restaurant to hold as many tables in the dining hall as possible but it got to the point where it was difficult for the waiters to reach us. The crowding made the restaurant a little uncomfortable but apart from that, the ambiance was very good for a Chinese restaurant. It makes for a decent restaurant to take guests to.

The front of house staff are all very courteous and polite, excusing for reaching over…etc, stuff pretty much unheard of in a typical Chinese place. There is a lady there that looks to be the owner of the place. She was friendly and helpful, and has that sincerity that makes you feel really welcome.

We ordered a lobster meal set ($88) which gets you 4 pounds of lobster prepared with your choice of sauce or seasoning, two other main dishes and desserts. We also ordered an additional main dish aside from the set.

We had our lobster prepared in a simple ginger and onion sauce (there are many sauces to choose from). You can use the lobster cracker and lobster pick to help with eating so it’s doesn’t get too messy. We also chose to add the egg noodles ($6) to make sure the yummy sauce doesn’t go to waste. I couldn’t see much ginger or onions on the dish and the sauce tasted more garlicky than ginger and onion. It wasn’t a particularly meaty lobster but the meat was bouncy and tasty. It had the typical starchy coating, but I felt theirs was a little thicker than normal and would’ve liked it to be less thick. The bed of noodles picked up some of the garlicky and fragrant sauce and was a great complement to the lobster. 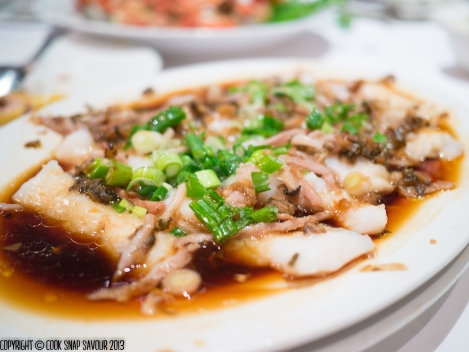 This was hands down the best dish of the night. It was prepared with thick cod fillets steamed in slightly sweet soy sauce on a bed of tofu. The cod was meaty yet delicate and perfectly executed so with every bite, you get the sweet soy seeping out from the moist fish. There were also shreds of flavourful pork and pickled dried vegetables scattered throughout the dish. Just delicious!

The chicken was moist and there was no issue with execution. Although the dish name refers to fish sauce, I tasted mostly sesame oil instead of fish sauce.

This was the extra dish we added to our lobster set. Unfortunately, it was the least successful dish of the night. I found the beef way too tough and the seasonings and flavours seemed muted. There was some heat from the satay sauce but the sauce seemed to lack in focus. The bed of Chinese vermicelli was okay but it wasn’t chewy enough.

The red bean soup was just alright, I found it too watery but the flavours were fine. This comes along with the set dinner at no extra charge.

The coconut cookies were really delicious and I’m glad I haven’t seen them sold in stores because these babies are addicting! They were crispy on the outside while slightly chewy on the inside, with a lovely buttery and coconut-y flavor. These come along with the set dinner at no extra charge.

The coconut and red bean pudding was well flavored and the two flavors are just a winning combo by default. I liked the contrast of the pudding texture of the coconut layer and the smooth and mushy texture of the red bean layer. These come along with the set dinner at no extra charge.

All in all, the lobster set dinner was really good value. In general the food was okay with some hit and miss and the service was great. There isn’t really another Chinese restaurant with this kind of ambiance in the area so it is certainly a good place for a nice Chinese dinner for special occasions.